Will He Call Me Back, Shamalah??

Shamalah-Allah, When will he call back?
Why hasn’t he called back?
I’m not calling him!!
Should I call him?!…. Naaahh! 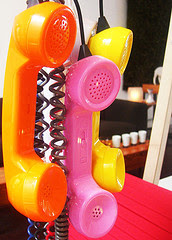 Listen up Ladies! and Gentlemen ! I’ll give you the skinny on returning phone calls or lack there of.

The Phone Call Returners Are…

The Non-phone call returners are well…..NOT!

(Aside from all of us having busy lives) We all are aware of whether or not we called someone back or not. And we all have not returned phone calls for one reason or another. It just really sucks when we are on the shorter end of the stick.

There are many scenarios as to why a person does not return calls, but I am choosing to focus on the most common scenarios that I come across in my reading sessions involving dating/relationships. Hopefully these examples will help to clear the air about this extremely common issue.

If you are already in a quasi-relationship of some sorts, such as a short-term dating situation, or he’s a “semi-friend-like-maybe-interested-in-something-more” type of thing, you can bet that not returning your phone calls within at least 2-3 days fits into the above “NOT” category. He is of poor character, kind of like “Grade C” meat -that’s not so healthy. So, throw that one in the trash. He’s all about himself and he’ll cost you a lot of wasted time and emotion.

If you are already in a committed relationship with someone ( or not ) BUT are just sooooo in love and want to make it work and he is not returning your calls, please see SCENARIO “A”. He’s “Grade C” meat, if you eat enough of it, you will eventually get sick. Throw it in the trash. That person is not of a high caliber and does not have the inner workings for a healthy relationship with anyone.

and last but not least.

You had your first date with this guy and you really like him a lot, but it’s been 3-4 days and no phone call. My best advice is to first wait about a week. Let the dust settle a bit. No one wants to appear overly anxious, it’s just not attractive. If after a week, no call… then call him. YES! YOU call HIM. Why? Because we want to really know what’s up. If the phone call seemed very good and he still hasn’t called you back within the following week, then unfortunately he probably wasn’t attracted to you as much as you to him. We’ll have to let that one go. Don’t fight it. Accept it. You are choosing better for yourself.

Overall, the key is to not get overly attached in the beginning when first meeting someone. When we are initially attracted to someone, the tendency is to get overly excited, day dream, and fantasize, then the next thing you know, we’ve mistakenly fell in love with the imaginary man in our minds and dumped unrealistic expectations upon someone we just met.

Getting to know someone’s true character takes time and observing how someone is treating you involves not getting too close too fast. Look for patterns in a person’s behavior. If it happened once, maybe there was a good explanation…hey, life happens. But if it happens again consecutively, then BAM! that’s a pattern. RED FLAG!RED FLAG!RED FLAG!RED FLAG!

Observing the pattern of how a person returns your phone calls says a whole lot; And I emphasize patterns, we all have them whether we think we’re sly or not. Pay attention. Accept it and keep going until you find what is compatible for you. A good compatible situation should be…